“Peace is not an absence of war; it is a virtue, a state of  mind, a disposition for benevolence, confidence, justice.”      -Baruch Spinoza

Most often public health focuses on prevention. Yet, when it comes to violence we need to look beyond just prevention and develop ideas for creating peaceful communities.

In order to effect a true change in the culture of a community an environment conducive to peace must be created.  As Baruch Spinoza suggested in the above quote, it is truly a holistic intervention, whose success depends on community engagement.  This requires more than an organization simply coming in and doing a program that will fix the community.  It requires a relationship being developed with the community and allowing the community to take ownership of  the interventions, as they are the ones that truly know what it will take to create the environment necessary for sustainable change.   It is this type of programming based on an empowerment model that will truly create the kind of environment where young people can grow and develop maximizing their potential and working for real peace in their community.

It reminds me of a story told on the NBC television show the West Wing, about a man walking down a path and falling into a deep hole.  He was unable to get out after many failed attempts and was getting desperate when he saw a doctor walk past.  He called out, “Hey, Doc! Help me out.”  The doctor reached into his white coat and pulled out his prescription pad, wrote a prescription and dropped it down the hole.  He then walked on.  A little later, the man saw a minister walking by.  Again he called out, “Hey Padre! Help me out.”  The minister wrote out a beautiful prayer and threw it down the hole and continued down the road.  Finally, the man saw his friend walk past.  He yelled up, “Hey, Jack, help me out!”  His friend jumped down the hole.  The man was incredulous, he cried, “Are you crazy!  Now we are both down here.”  Jack calmly replied, “I know, but I’ve been down here before and I know the way out.” 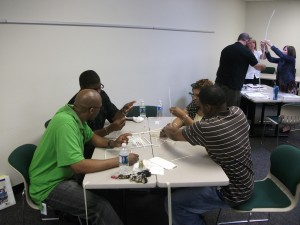 Like Jack we must be willing to jump into the hole with the communities we are working with, and we must enter into a genuine relationship with them, if we are to ever create the kind of environment that will engender real change.  We must do more than supply funding, programming and technical assistance.  We must join hands and enter into a partnership which will produce the kind of state of mind that Spinoza was talking about.  We must be about more than preventing violence; we must be about creating peace.