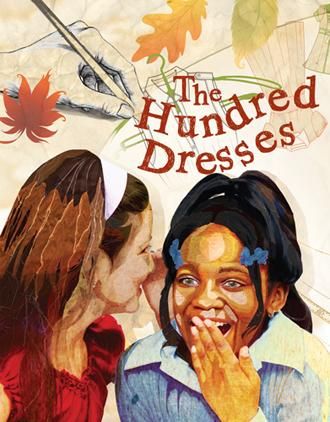 The Hundred Dresses by Mary Hall Surface is a play based on the Newbery Honor Book by Eleanor Estes and is the Flint Youth Theatre’s second production in their 2012-2013 series. The play follows Maddie,  a young girl who finds herself a bystander to bullying, watching her “popular” group of friends tease another girl. The play follows Maddie as she changes her attitude and eventually  becomes an advocate for those that are bullied, standing up for the other girl and making an unlikely friend in the process.

The Flint Youth Theatre produced this play and partnered with the Michigan Youth Violence Prevention Center to lead discussions about bullying and its effects.  Two talkback sessions were held after the performances where YES staff joined select cast members to answer questions on the show, bullying, and the research being done with the MI-YVPC.

Bullying is a major public health problem, particularly among school-aged children, and has been for years.  The Hundred Dresses, written in the 1940s and set in 1938, gives some perspective to this timeless struggle. Bullying is now becoming an increasingly greater issue in our digital age, where the Internet and cellphones have given birth to a generation of cyber bullying.

While new technology has many benefits, it also has its drawbacks. Facebook, chat rooms, and other websites have been designed to increase communication with friends and family and to open doors to meeting new people. It has become easier than ever for people to find others with shared interests, as obscure as they may be, and websites like eHarmony have had phenomenal success. However, this easy access pathway to such a large part of the world around us also can lead to an invasion of privacy, and sometimes, bullying and sexual harassment.

Cyberbullying has seen such high levels for a few reasons:

While the levels of cyberbullying remain below those of traditional bullying, which happens for the most part in school, cyberbullying is still a very real and painful problem. Many people find themselves more scared about internet bullying than the more common school bullying. The effects of cyberbullying tend to be the same as those for youth who are bullied in person including drop in grades, low self-esteems, and depression.

Bullying in all forms is detrimental to both the health of individuals and the strength of a community. The Hundred Dresses and the program designed by the Flint Youth Theater and MI-YVPC is one phenomenal way the community is raising awareness and trying to stop bullying- both face-to-face and through technology.

A study guide was written by YES research assistant Colette McAfee to go along with the play and can also be implemented in school settings.

For more about the Flint Youth Theatre and their other upcoming productions visit them online at http://www.thefim.org/fyt-homepage