During a recent trip to the movie theater to see Quentin Tarantino’s latest movie ‘Django Unchained’ I felt rather unsettled to see two young parents sitting in front of me accompanied by a young boy who was barely ten years old. In classic Tarantino fashion the controversial film became a glorified blood bath as its characters wielded guns, fought violently and tortured one another, all while somehow making mass murder seem cool and fun. At its conclusion, I couldn’t decide if the film was awesome or awful. In the wake of the Newtown tragedy and in light of the endless media coverage surrounding our nation’s gun violence, I couldn’t help but think about the boy sitting in front of me and what implications a film like this may have on America’s youth.

According to the American Academy of Child and Adolescent Psychiatry (AACAP) a typical American child will view more than 200,000 acts of violence on television and in film before reaching the age of eighteen. Often heroes are portrayed as violent and are rewarded for their behavior. Take for example, Jamie Foxx as the title character in ‘Django Unchained’ – a bounty hunter who receives monetary rewards for each individual he kills. Is this the type of role model we want for our youth? One who perpetuates the notion that it’s both ‘cool’ and acceptable to carry automatic weapons and take down the ‘bad guys.’ AACAP explains, “The typical scenario of using violence for a righteous cause may translate in daily life into a justification for using violence to retaliate against perceived victimizers. Hence, vulnerable youth who have been victimized may be tempted to use violent means to solve problems.” 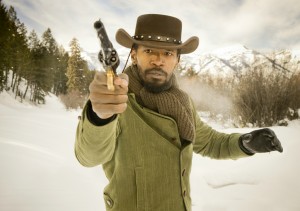 When Tarantino was explicitly asked about the potential links between movie violence and real life violence he tersely replied “Don’t ask me a question like that. I’m not biting. I refuse your question.” And when another interviewer attempted to connect the events at Sandy Hook Elementary to violent movies Tarantino replied, “I think it’s totally disrespectful to their memory. Obviously, the issue is gun control and mental health.” While I may not agree with many of Tarantino’s antics, he does make a valid point. ‘Django Unchained’ grossed more than $125 million in its first three weeks and won him a Golden Globe for best screenplay. Clearly all of the recent gun-related tragedies have not deterred Americans from paying to see violent films in the first place.

So I’m left wondering where we go from here. If violence is a fundamental part of our culture, rooted in our history, how do we begin to challenge these long-lasting social norms that violence is both a normal and acceptable aspect of our society? With all of the political and social discussions around gun control, violence prevention and mental health programs, perhaps it is best we start with some critical self reflection and look at the broader social context from which these ‘hot button’ topics are derived. As soon as we begin to acknowledge our own obsessions with violence as a form of entertainment and the potential impact it has on our youth, perhaps we can begin to shift these dialogues and enact meaningful social change in the not only the way we recognize violence, but how violence impacts our everyday lives.