Can programs like the Genesee County Land Bank’s Clean and Green Program prevent crime? Tom Reischl, PhD, Evaluation Director at MI-YVPC and the Prevention Research Center of Michigan, recently spoke to the Genesee County Board of Commissioners in support of funding for the Land Bank’s property maintenance programs.  His remarks are posted below:


Both violent crime and property crimes are greatly influenced by causal factors in the physical and social environment.  A neighborhood’s physical conditions and the social dynamics are among the primary reasons why crime occurs in very specific neighborhoods one generation after another.  Urban blight and decay are now widely recognized as invitations to violent and property crimes.  This is often referred to as the Broken Windows Theory, introduced by James Wilson and George Kelling in the early 1980s.

Broken Windows theory posits that untended property (symbolized by a single broken window) is a visual cue for diminished social control and attracts additional vandalism, loitering, and other criminal acts. Vacant buildings can become havens for trash, stray animals, squatters, and criminals. Vacant properties are also more likely to be vandalized or burned to the ground, and theft from vacant properties is less likely to be reported.  Moreover, as residents perceive a rise in crime, they modify their behavior by avoiding social interactions near the untended property or by moving out of the neighborhood, further reducing informal social controls and fostering more crime.

My colleagues at the University of Michigan and I are currently working with the Land Bank and other community partners to prevent violent crime in one neighborhood of Flint where property vacancy rates are closed to 50%.  This neighborhood experiences high rates of violent crime despite the absence of natural gathering places for teens and young adults, such as high schools or night clubs, where violence is likely.  The Land Bank’s efforts to improve and maintain vacant properties are a critical element of our efforts to reduce urban blight and to prevent violent crime in this location. 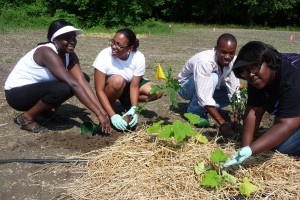 We have recently completed a study of the effects of a Youth Empowerment Solutions (YES) project in another high crime area of Flint.  Middle school youth worked with neighborhood adults to clean up and transform three adjacent vacant (and uncared for) lots into a park, the Rosa Parks Peace Park, located at the corner of Fleming Rd and De Freest St – near Flint Park Lake on the NW side.  We tracked violent crimes for 22 months before and after the development of these vacant lots and noted a 37% drop in violent crimes within 200 meters of this project site.  Within 100 meters of the site, there was a more pronounced 56% drop in violent crimes.  The evidence from our study suggests that beautifying and maintaining vacant property can be an effective crime prevention strategy. 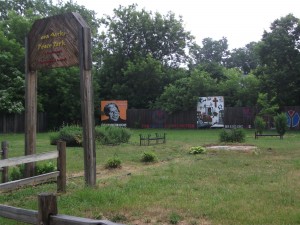 In many neighborhoods, the Land Banks’ Clean and Green program (and other property maintenance programs) are the only way vacant properties are cared for.  A loss in support for the Land Bank programs would be a lost opportunity to prevent crime in Flint and in Genesee County.