Social Media is a huge part of the lives of everyday Americans, and there is growing evidence to support the role that social media plays in youth violence, both directly and indirectly.

Very similar to the recent cyber bullying phenomenon, Twitter, Facebook, and YouTube have become a platform for youth violence. ABC News  covered a story where they interviewed a Chicago resident that showed correspondents how sites were used by gang members to promote violence. It showed how gangs used social media sites to make threats, “call out” rival gangs, promote violence and recruit members. This activity led to real “Stomp-Outs”, real shootings, and real deaths.

In addition to direct violence from social media, a new trend called  “Fight Compilations” has become increasingly popular on sites such as World Star Hip Hop and YouTube. Fight Compilations are videos composed of fight snippets that everyday people record, usually on their cell phones. 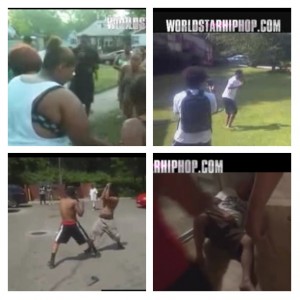 The images to the right are what you would typically see in a fight compilation video.  Spectators surrounding a fight, often times recording it on their mobile devices. Interestingly enough hundreds of thousands of people tune in to watch these clips, with some videos getting millions of hits. It’s become such a huge trend that by a simple google search, you can find the “best fight compilation videos” of the week and 2013.

Continual exposure to violence like this can have adverse effects on youth. Meta-analyses of the unhealthy effects of media-violence have shown that youth who view media-violence on a regular basis are more likely to exhibit antisocial behavior, ranging from imitative violent behavior with toys to criminal violence, acceptance of violent behavior, increased feelings of hostility, and desensitization toward violent behavior. This information is not applicable to all youth who view it, but imagine a young impressionable pre-teen that may think this behavior (hostile fights) is acceptable.

Youth who oftentimes are continually exposed to violence in the media result to violence to solve their problems. This can partially be attributed to what they see and who they’re around, because youth learn their social skills from their surroundings (Social Cognitive Theory, Bandura, 1986).

Social cognitive interventions are one’s whose aim is to equip youth with social skills in order to cope with stressful situations, and are proven to be helpful in positive youth development, and youth violence prevention. From a public health standpoint Browne and Hamilton-Giachritsis describe how solutions to youth violence based from the media are multifaceted, and involves intervention from the key stakeholders; youth, parents, policy makers, and media outlets. But whose job is it really? How do we stop social media from influencing violent behavior among youth?

Brittany is a second year graduate student studying Health Behavior and Health Education at the U-M School of Public. She is currently working on the YVPC social media campaign, and with  YES on the YES Adaptation project.